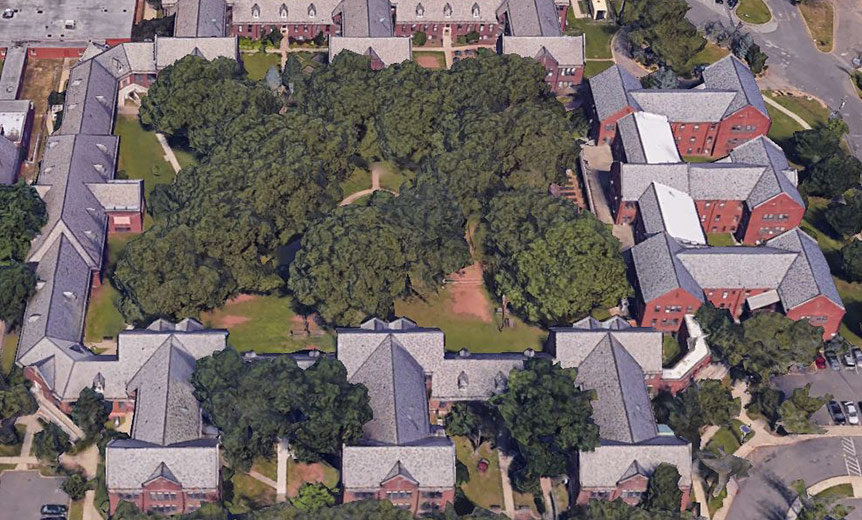 The project includes the interior renovation of approximately 75,000sf across four (4) buildings at the existing Meadowview Campus for the Hudson County Prosecutor Office. Two (2) Detention Cell areas, each with three (3) holding cells, are also to be constructed and added on to the existing facility. Interior fit out includes a new Child Advocacy Center, offices for the Prosecutor and staff, law enforcement offices, evidence processing, a forensic lab, conference rooms and a training room.

The Honorable Frank J. Guarini Justice Complex was designed by RVA subsequent to the completion of the master plan completed by RVA. The facility will be a new 405,000 square-foot, five-story building with a basement located in Jersey City, New Jersey. A six-story parking garage with approximately 459 parking spaces, will be located on the east end of the courthouse building, and will provide parking for Judges, County Employees, and Jurors. It will replace the existing Hudson County Administration Building and will accommodate ten (10) Criminal Courtrooms, twelve (12) Family Courtrooms, Judges Chambers, Sheriff Operations and Offices, Courts Administration, and the Prosecutor’s Office.

The Historic William J. Brennan Hudson County Courthouse Renovations Project is an adaptive reuse of the existing Surrogate area, Civil Division Administrative area, and Appellate area. The renovation consists of two (2) new Civil Courtrooms, Judges Chambers, administrative space, conference rooms, and jury rooms. When complete the Historic William J. Brennan Courthouse will house the Hudson County Civil Court with ten (10) courtrooms. Working with the County of Hudson, the Administrative Office of the New Jersey Courts and the New Jersey Historic Preservation Office, the renovation is intended to meet current NJ Courthouse Facility Guidelines while minimizing encroachments upon the building’s historic fabric, maintaining the historic character of the Courthouse and allowing for the continuous use of the Courthouse for its historic purpose.

The Municipal Complex Redevelopment will provide expanded and upgraded services to the residents of Berkeley Heights and address the limits of the current outmoded facilities. Amenities of the new Municipal Complex will include a senior area/meeting room, a public meeting room for municipal meetings and community spaces such as multipurpose rooms, an exercise room and a children’s playroom. The facility will also include the new police headquarters complete with holding cells, dispatch center, briefing room, staff offices and training rooms. Additionally, a new modern library facility will be constructed along with new township administrative offices and additional commuter parking.

This project is the first new police station for the City of Newark. Special to this location in the South Ward is the incorporation of Office of Emergency Management (OEM) and the new home for the Newark Police Headquarters. Standing at 3 stories, the building totals 74,980 SF and is comprised of the following elements:

MAST is responsible for managing the design and construction of a new courthouse to be located at 2 Cherry Street. Due to the growing needs of the Family Court, a new building is being designed to be constructed at Cherry Street to serve 6 new Family Court rooms with judge’s chambers, offices, dedicated storage, secure areas, holding cells, three distinct areas for circulation for the public, the prisoners and the judges and their respective staff. The new building will be sited at Cherry Street and Rahway Avenue; here there are existing County facilities that will be demolished, and one of the user groups, the Union County Improvement Authority, will be relocated within this new building, maintaining its own entrance for security purposes.

The County embarked on this ambitious project in order to share resources, consolidate and increase efficiencies. Originally, the corporate headquarters for Pharmaceutical firms, the “Block Drug” building conversion will consist of a 340,000 SF interior renovation and associated exterior improvements with site upgrades of the seven-story building located at 257 Cornelison Avenue.  The project was a multi-phase build out allowing the County to begin moving several programs, services and departments into the building in November of 2007.

The first occupants include the Sheriff’s office, operations division, patrol and 911, the health clinic and the Rutgers co-op program. The remainder of departments which included, the Department of Family Services, County Clerk, County Register, Board of Elections, Director of Public Resources, Tax Assessment, County Surrogate, Court Administration, Building Services and Maintenance and Facility Management moved in at the project completion in December 2008.

This facility houses over 1/3 of the County’s personnel.

The County of Bergen has embarked on an ambitious project to provide a new Juvenile Detention Center.  Located at 200 North Street in Teterboro, New Jersey, the new Juvenile Detention Center will be progressive and provide for a safe and secure environment. At approximately 39,000 SF, the new center will provide for a dormitory to house 29 juveniles; two pods to house the male population, one pod to house the female population and the space to provide for an additional pod to be built out should the need arise in the future, lavatories, indoor and outdoor recreation areas, a cafeteria and kitchen, classrooms, outpatient facility, administration offices and guard facilities.

A new Youth Shelter of approximately 11,000 SF has been designed to accommodate 16 people and will be located at the same site. The JDC and the Shelter will share common functions and operations such as the kitchen, medical personnel, outdoor recreation area and gymnasium.